Hong Kong Arts Development Council e il e M+ Museum, hanno annunciato che l'artista Lee Kit è stato selezionato per rappresentare Hong Kong alla prossima edizione della Biennale di Venezia 2012 .
Nato nel 1978 l'artista si dedica ad una pittura di vita quotidiana.
Testo in inglese:
The Hong Kong Arts Development Council (HKADC) and  M+, Hong Kong’s future museum for 20th and 21st century visual culture in the West Kowloon Cultural District, announced today, the selection of LEE Kit as the artist to represent Hong Kong at the 55th International Art Exhibition of the Venice Biennale, opening on 11 June 2013.This is the first time the HKADC collaborates with M+ in presenting the works of a Hong Kong artist in the Venice Biennale – one of the world’s most important art events.
Presiding at today's press conference, Mr Chow Yung-ping, Chief Executive of the HKADC, said, "Through the collaboration, we aim to provide the best environment for our artists to showcase their creativity and talents and to achieve the best exhibition and marketing outcome for Hong Kong's presence at Venice."
"M+ will provide expertise in the selection of the artist as well as curating and organising the exhibition, while the HKADC will share its ample experiences on project management", Mr Chow added. The HKADC has taken part in the Venice Biennale since 2001 and the past six editions have succeeded in attracting nearly 400,000 visitors.
Dr Lars Nittve, world-renowned curator and M+ Executive Director of West Kowloon Cultural District Authority, is the Lead Curator of the pavilion.
Commenting on the selection of Lee Kit, Dr Nittve said: “Lee Kit is to me one of the leading artists in Hong Kong’s thriving contemporary art scene. I have during my years here been repeatedly touched by how Lee Kit so seemingly effortlessly manages to mix a deep understanding of contemporary art with something very personal and intimate. His work is at the same time uncompromising and extraordinarily open for participation, intimate and at the same time public. It truly embodies the fundamental and wonderful uncertainty at the heart of all good art – while bringing together western and ancient Asian cultural traditions. Last, but not the least, I am totally confident that Lee Kit has the capacity to make the best out of the perfectly located, but far from easy, exhibition venue that Hong Kong has in Venice!”
Lee Kit was born in Hong Kong in 1978 and during his studies (2001-2006) at The Chinese University of Hong Kong, was already selected for a solo exhibition ‘Painting Furniture’ in Fo Tan. Despite working in many media – painting, video, sculpture, installations and performance-like situations – his works are highly recognisable, often using a subtle pastel colour palette and reflecting on aspects of daily life. Recent solo exhibitions include: ‘Something in my hands’ in Aike-Dellarco Gallery at ART HK 12 where he won the ART FUTURES prize (2012); ‘How to set up a room for Johnny’ in Osage Gallery as the first Hong Kong artist in Art Statements at Art Basel (2011); and ‘Henry’ at Western Front, Vancouver (2011). He has participated in group exhibitions across the world including in leading museums, such as Tate Modern in ‘No soul for sale’ (2010), The Museum of Modern Art, New York in ‘Print/Out’ (2012) and The New Museum, New York in ‘The Ungovernables’ (2012).
For the first time in Hong Kong, this year’s co-presentation and selection comes from the HKADC adopting a model successfully used in many other participating countries, where an esteemed local arts body or institution is given the responsibility to select the curator and the artist to represent Hong Kong at the Biennale.
More on LEE KIT1978 Born in Hong Kong2003  Bachelor of Fine Art, the Chinese University of Hong Kong2006  Master of Fine Art, the Chinese University of Hong Kong
Solo Exhibitions2013 Hong Kong Pavilion, Venice Biennale, Italy (June)         Solo at Project Fulfill, Taipei (Aug)
2012 ‘Mary, sometimes I misunderstand the things you said.’,          Chi-wen Gallery, Taipei (Nov)         Solo at Artissima, Turino, Italy (Nov)         Solo at Min Sheung Modern Museum, Shanghai (Oct)         Solo project at The Pavilion, Beijing (Aug)         ‘Something in my hands’ in Aike-Dellarco Gallery at ART HK 12         ‘How to set up an apartment for Johnny.’, Osage Gallery, Hong Kong         ‘It’s not an easy thing.’, Arrow Factory, Beijing
2011 Henry, Western Front, Vancouver         ‘In purity, I silently reach for you.’, Hot Spot,          SHcontemporary 11, Shanghai         ‘How to set up an apartment for Johnny?’, Art Statements,          Art Basel 42, Switzerland          1, 2, 3, 4…, Lombard Freid Projects, New York          Watching Soap (I can’t recall the day that I last heard from you),          Osage Gallery, Hong Kong ...

Artist in Residence2007-08    Bolton Street Artist in Residence, Wellington, New Zealand (One month)
AwardsCheung’s Fine Arts Award (painting), The Art of CUHK 2003Finalist of the Sovereign Asian Art Prize 2009-10ART FUTURES prize, ART HK 12
CollectionsStedelijk Museum voor Actuele KunstThe Hong Kong Museum of ArtPrivate collection (Hong Kong, New Zealand, South Korea, Sweden, Taiwan)
Notes for Editors
LEAD CURATORDr Lars NITTVEExecutive Director, M+West Kowloon Cultural District Authority, Hong Kong
Lars Nittve was born in Stockholm in 1953. After studies at the Stockholm School of Economics, a M.A. at Stockholm University and Post Graduate Studies at New York University, he served as lecturer in art history at the University of Stockholm during the period 1978-85. During the same period he held a post as Senior Art Critic at the daily Svenska Dagbladet, Stockholm, and contributed regularly to Artforum magazine, New York.
In 1986 Dr Nittve was appointed Chief curator at the Moderna Museet in Stockholm, where he curated a large number of high profile exhibitions, among them the seminal Implosion – a Postmodern Perspective. 1990-95 he served as founding Director of Rooseum – Center for Contemporary Art in Malmö, Sweden, where he organised the whole exhibition programme, including surveys of Susan Rothenberg, Allan McCollum, Sherrie Levine and Andreas Gursky. In July 1995, Dr Nittve became Director of the Louisiana Museum of Modern Art in Humlebaek, Denmark, where he also curated the groundbreaking exhibition Sunshine & Noir – Art in L.A. 1960-1997 and the first one-person exhibition of Cai Guo Qiang outside Asia. In the spring of 1998, he was named the first Director of Tate Modern, London, which opened in May 2000 to great acclaim. On November 1, 2001, he took up his post as Director of Moderna Museet in Stockholm where in 2004, he also co-curated the thematic exhibition Fashination about the dialogue between art and fashion in the last ten years;  in 2008 he curated Time and Place: Los Angeles 1957-1968. Since January 2011, Dr Nittve has been the Executive Director,M+, the museum of visual culture in the West Kowloon Culural District in Hong Kong, scheduled to open in 2017.
Dr Nittve is the author of several books on art, as well as articles in journals and catalogues in Sweden and abroad. He has served on the jury of numerous international prizes and been on the board of large number of arts organisations as well as being awarded a number of honours and prizes. In 2009 he was awarded a Ph.D at the University of Umeå, Sweden.
Dr Nittve has attended the Venice Biennale in a professional capacity since 1980, acting as the official curator for the Norwegian, Finnish and Swedish participation in 1993; served as Expert Advisor to the Biennale Director in 1997 and commissioner for the Swedish participation in 2003, 2005, 2007 and 2009.

HONG KONG ARTS DEVELOPMENT COUNCIL
Established in 1995, the Hong Kong Arts Development Council (HKADC) is a statutory body set up by the government to plan, promote and support the broad development of the arts including literary arts, performing arts, visual arts as well as film and media arts in Hong Kong. Aiming to foster a thriving arts environment and enhancing the quality of life of the public, the HKADC is also committed to facilitating community-wide participation in the arts and arts education, encouraging arts criticism, raising the standard of arts administration and strengthening the works on arts policy research.
To achieve the goals of fostering the development of arts groups, raising the level of artistic standards and exploring development opportunities for artists, the following development strategies will be adopted: 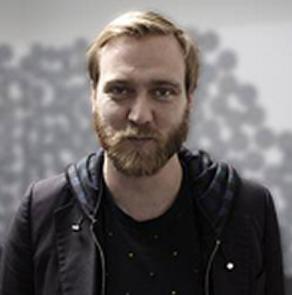 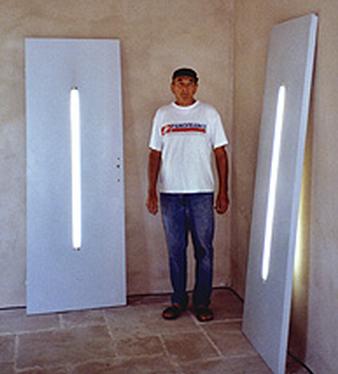 Celebrated New Zealand sculptor, photographer and installation artist Bill Culbert has been invited by Creative New Zealand to present his work at the 55th Venice Biennale in 2013.
Otago-born Culbert painted and worked more conceptually before beginning his experimentation with electric light in the late 1960s.  Often associated with kinetic and constructivist art, he also has a strong affinity with Marcel Duchamp and Lazlo Moholy-Nagy through his work with found objects and through a continuing exploration of ideas around light, energy, perspective, social space and politics.
Culbert has sustained a busy exhibition schedule throughout his career, with more than 100 solo exhibitions in New Zealand, England, Europe, the United States and Australia since 1960, and many more group exhibitions and major public art commissions.  Details of his exhibition in Venice to come. 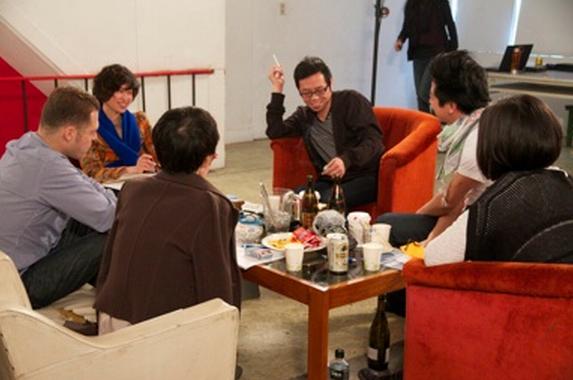