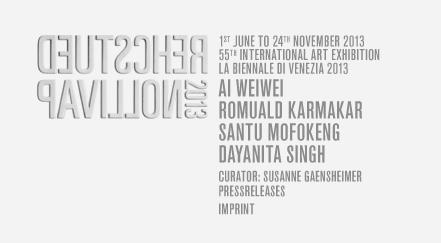 Dear Ladies and Gentlemen,
In May we announced that Dr. Susanne Gaensheimer, Director of the MMK Museum für Moderne Kunst Frankfurt am Main, has been appointed curator of the German Pavilion at the 55th International Art Exhibition – La Biennale di Venezia in 2013 for a second time consecutively.

Today we would like to present Susanne Gaensheimer’s curatorial point of departure and the invited artists for 2013.
With her plans for the German contribution to the upcoming Venice Biennale, Gaensheimer continues the transnational approach, which characterized her cooperation with Christoph Schlingensief in 2010–2011. “My decision to invite Christoph Schlingensief to Venice was ultimately also influenced by his Africa project, namely the opera village in Ouagadougou”, Susanne Gaensheimer commented in a press release in June 2010. “What becomes clear here is that Schlingensief is not only representative of art in Germany, but that he puts his concerns in a global context. Planning the opera house in Africa and cooperating with the local partners there and, importantly, by using the project for self-reflection in his play Via Intolleranza II, Schlingensief succeeds in giving his analysis of ‘being German’ and the issues associated there with a transnational dimension: ‚ Why are we always so interested in helping the African continent if we can’t even help ourselves?’ he asked.”

Using diverse forms of expression to explore the issues of his generation with uncompromising directness for over 30 years, Christoph Schlingensief pushed the boundaries of art. For the 2011 German Pavilion he planned to fundamentally address the problems of the German, European, and western relationship to Africa and to question the supposed unambiguity of so-called national identities.

In 2013 Gaensheimer carries forward this critical investigation of the significance of traditional forms of national representation in the national pavilions at the Venice Biennale. Contemporary artistic production in Germany, as elsewhere, is characterized by multilayered forms of cooperation between artists from all over the world and by international intellectual and cultural exchange. Therefore, at the Venice Biennale, Germany will not be represented as a hermetic national unit but as an active participant in a complex, worldwide constellation. For this reason Gaensheimer has invited four international artists from different countries:

The artists are represented in major museums and collections throughout the world and have taken part in important international, large-scale exhibitions and film festivals. Their works, exhibitions, publications, and films are part of the international artistic discourse and have in part determined this discourse. In addition, all four artists are also associated with the German art scene in a particular way. Ai Weiwei, Romuald Karmakar, Santu Mofokeng and Dayanita Singh have been working in Germany for many years, in close cooperation with German institutions, publishing houses, and collections. Their works share a critical reconsideration of the artists’ individual respective realities and offer important trajectories for reflecting on cultural and social selfconception in a globalized world. In the process the artists use a large range of media, including photography and film in addition to sculpture and installation.

On her choice of artists Gaensheimer says: “Both everyday life and the cultural landscape of Germany are determined by different religions, economies, and political approaches. This defines our everyday and leads to mutual enrichment as well as to confrontation. At the same time it is extremely evident that our society can no longer function without dialog, collaboration and the addressing of different philosophies and actual realities. For me, working together with a group of artists from different countries for the Venice Biennale is also a logical continuation of my work with Christoph Schlingensief. The artists whom I invited and their works are representative of a number of issues resulting from the convergence of diverse ideologies and conceptions of life, which impact us most immediately today. In the context of the Venice-project it is important to me that these artists manage to expand our perspectives and give us access to the view of the other, sometimes in an uncomfortable way. Although they develop their works out of specific, local contexts, they establish a kind of universal visual language by integrating their individual experiences of internationality.”

A publication is planned to accompany the exhibition in the pavilion and will include a number of exclusive, new contributions by international authors on the themes mentioned above as well as texts on the participating artists and an extensive photographic documentation of their works.

Elke aus dem Moore, Director of the Art Department of the Institute for Foreign Cultural Relations (Institut für Auslandsbeziehungen – ifa) comments: “In the context of the national pavilions in the Giardini the invitation of these four artists emphasizes the necessity of transnational collaboration. Susanne Gaensheimer, who received the Golden Lion in 2011 especially for her curatorial approach, once again shows a certain courage and vision with her curatorial concept. Both her concept and her choice of artists focus on art and it’s potential to cross borders. Gaensheimer addresses central questions of contemporary society and dares to critically reinterpret the rules of one of the biggest international cultural events. We are very much looking forward to this
collaboration.”

For a couple of months we and the invited artists are in direct dialogue with Christine Macel, the curator of the French Pavilion and Chief Curator at the Musée National d’Art Moderne – Centre Pompidou, Paris, and Anri Sala, the artist invited by France, about the possibilities of a cooperation between France and Germany. We will keep you posted on this in the next couple of weeks.

The German contribution is commissioned by the Federal Foreign Office of the Federal Republic of Germany and will be realized in cooperation with the Institute for Foreign Cultural Relations (Institut für Auslandsbeziehungen – ifa).