English - from the web site http://www.creativescotland.com/


The Scotland + Venice partnership is delighted to announce that Graham Fagen has been selected to represent Scotland at the 56th International Art Exhibition, the Venice Biennale, running from 9 May to 22 November 2015, in a solo presentation commissioned and curated by Hospitalfield Arts, Arbroath. Graham Fagen is one of the UK’s foremost contemporary artists. His work mixes media and crosses continents; combining video, performance, photography, and sculpture with text, live music and even, plants. His recurring artistic themes, which include flowers, journeys and popular song, are used as attempts to understand and talk clear-sightedly about the powerful forces that shape our lives.
Hospitalfield Arts is based in the early arts and crafts house and grounds of the 19th century artist and collector, Patrick Allan-Fraser. Located just to the south of Arbroath, the house, collections and estate were left in trust on Allan-Fraser’s death and in 1901 Hospitalfield was established as a place of work and learning for artists and students, making a significant contribution to 20th century Scottish art.  Today a series of nationally and internationally significant residency programmes for artists, curators and writers, continue to be accommodated within the house and purpose built studios.
The selection Panel included: Amanda Catto, Portfolio Manager for Visual Arts at Creative Scotland and Chair of the Scotland + Venice partnership; Francis McKee, Director of the CCA and co-curator of Zenomap for Scotland + Venice in 2003; Richard Riley, Head of Exhibitions, Visual Arts Department, British Council; Dana MacLeod, Head of Arts, British Council Scotland; David Watt, Director of Arts and Business Scotland and Board member of SCAN – the Scottish Contemporary Art Network.
The Venice Biennale is the largest and most prestigious visual arts exhibition in the world. This will be the seventh presentation from Scotland + Venice, a partnership between Creative Scotland, National Galleries of Scotland and British Council Scotland.  For the partners, Venice is an important project that helps to build Scotland’s profile and reputation as an international centre for the visual arts.
Amanda Catto, Chair of the Scotland + Venice Partnership and Portfolio Manager for Visual Arts at Creative Scotland said:
‘We are very excited to be working with the artist Graham Fagen and Hospitalfield Arts to stage a new commission for Scotland and Venice 2015.  The project provides Graham with an unprecedented opportunity to develop new work in an exceptional context.  We look forward to welcoming people to the exhibition when Biennale opens in May next year.’
Graham Fagen said:
‘It is a fantastic honour to have been invited to represent Scotland at the Venice Biennale in 2015. The Biennale is one of the most important events in the international calendar for the visual arts and I hope that I can do justice to its history and Scotland’s participation in it.’
Lucy Byatt, Director, Hospitalfield Arts said:
‘We could not be more delighted to be offered this opportunity to commission Scotland’s contribution to the Venice Biennale in 2015. It is an outstanding opportunity for Hospitalfield Arts to work closely with an artist such as Graham Fagen and to bring to Venice a project that emerges from our work in Arbroath in the beautiful region of Angus. We will enjoy too, the chance to work with Robin Klassnik and Matt’s Gallery who have supported Graham’s work for many years.’

For the artist/s selected Venice provides a significant opportunity for the development and presentation of new work.  For the partners Venice is an important project that helps to build Scotland’s profile and reputation as an international centre for the visual arts
Previous Scotland + Venice presentations have included Duncan Campbell, Hayley Tompkins and Corin Sworn (curated by The Common Guild in 2013), Karla Black (curated by the Fruitmarket Gallery in 2011), and Martin Boyce (curated by Dundee Contemporary Arts in 2009).
In 1999 Fagen was invited by the Imperial War Museum, London to work as the Official War Artist for Kosovo, and since then has exhibited widely both in the UK and abroad, and exhibitions include Golden Age, Institute of Contemporary Art, London (1999), The British Art Show (2000), part of Zenomap, Scotland and Venice at the 50th Venice Biennale (2003), Bloodshed at the Victoria & Albert Museum and Art of the Garden, Tate Britain (2004), Busan Biennale, South Korea, Still Life, Art and Industry Biennial, New Zealand (2004). In 2011 Fagen was the International Artist in Residence at Artpace, San Antonio, concluding with a solo exhibition, Under Heavy Manners, and created a special commission with the playwright Graham Eatough, which toured with the National Theatre of Scotland’s production of Andrew O’Hagan’s play, The Missing.
Forthcoming solo exhibitions include Cabbages in an Orchard at the Glasgow School of Art and Peek-A-Jobby at the Scottish National Gallery of Modern Art as part of GENERATION: 25 Years of Contemporary Art from Scotland; In Camera, with Graham Eatough at the Panorama, Le Friche, Marseille from September 2014. He is represented by Matts Gallery, London and Galerie Micky Schubert, Berlin. For further information please visit: www.grahamfagen.com
Hospitalfield is currently working on an £11.5m fundraising campaign with the aim of restoring the house and rejuvenating the facilities for audiences and for our arts programme. For further information please visit http://hospitalfield.org.uk
Pubblicato da Domenico Olivero a 20:35 Nessun commento: Link a questo post

The British Council is delighted to announce that Sarah Lucas has been selected to represent Britain at the 56th Venice International Art Biennale. She will present a major solo show in the British Pavilion, which will run from 9 May to 22 November 2015. The Artistic Director of the 56th International Art Biennale will be Okwui Enwezor.
Widely recognised as one of Britain's foremost contemporary artists, Lucas's work has consistently been characterised by its irreverent humour and deft use of ‘readymade' objects – furniture, food, tabloid newspapers, tights, toilets, cigarettes. By turns lewd and lyrical, punning and paradoxical, her art continues to deal frankly with sex, death, abjectness and the slippery notion of Englishness. “Humour is about negotiating the contradictions thrown up by convention”, Lucas has said. “To a certain extent, humour and seriousness are interchangeable. Otherwise it wouldn't be funny. Or devastating.”
The 2015 Venice Biennale Selection Committee, which advises the British Council on the UK's representation in the British Pavilion, is made up of the following members:
Charles Darwent, Art Critic and Writer
Lisa Le Feuvre, Head of Sculpture Studies, Henry Moore Institute, Leeds
Hannah Firth, Director of Visual Arts, Chapter, Cardiff
Margot Heller, Director, South London Gallery
Francesco Manacorda, Artistic Director, Tate Liverpool
Francis McKee, Director, Centre for Contemporary Art, Glasgow
Gregor Muir, Executive Director, Institute of Contemporary Arts, London
Polly Staple, Director, Chisenhale Gallery, London
On Lucas' selection for Venice, Gregor Muir states: “In recent years, Sarah Lucas has affirmed her status as a leading international artist with exhibitions in Berlin, Glasgow, Leeds, London, Mexico City, New York and Vienna. Having consistently pushed the limits of her practice, there's a sense that Lucas - seemingly more active than ever - is coming into her own. Initially entering the fray as a young British artist, Lucas continues to make her presence known through a powerful and progressive relationship with her work. Her output remains urgent while being rooted in a rich artistic tradition, to include feminism and surrealism. Running through her 'NUDs' and plaster phalluses, self-portraits and readymade sculptures, one finds a compelling interrogation of sexual form.”
Andrea Rose, British Council Director of Visual Arts and Chair of the Venice Biennale Selection Committee, has said: “To prick convention could be a term coined for Lucas’ work. It’s impolite.  Like zest in the artworld mix, her work will bring wit and savour to the Biennale. The Committee has chosen a formidably inventive sculptor to represent Britain.”
Lucas’ work has been presented in solo exhibitions around the world. Her latest exhibitions include a survey at Tramway, Glasgow (2014), ‘NOB + Gelatin’, Secession, Vienna (2013-14), and ‘SITUATION Absolute Beach Man Rubble’, Whitechapel Gallery, London (2013).
Sarah Lucas is represented by Sadie Coles HQ, London; Gladstone Gallery, New York; Kurimanzutto, Mexico City and CFA, Berlin.

Sarah Lucas studied at the Working Men's College (1982–3), London College of Printing (1983–4), and Goldsmith's College (1984–7). Following her participation in the seminal group show ‘Freeze’ (1988), early solo shows included ‘Penis Nailed to a Board’, City Racing, London, and ‘The Whole Joke’, Kingly Street, London (both 1992). In 1993 she collaborated with Tracey Emin on The Shop, a six-month venture on Bethnal Green Road. She has since exhibited internationally, with major exhibitions including those at the Museum of Modern Art, New York (1993), Museum Boymans-van Beunigen, Rotterdam (1996), Portikus, Frankfurt (1996), the Freud Museum, London (2000), ‘Sarah Lucas: Self Portraits and More Sex’, Tecla Sala, Barcelona (2000), and ‘In-A-Gadda-Da-Vida’ (with Angus Fairhurst and Damien Hirst) at Tate Britain (2004). A retrospective of her work took place in 2005 consecutively at Kunsthalle Zürich, Kunstverein Hamburg, and Tate Liverpool. More recent international projects include ‘LUCAS BOSCH GELATIN’ at Kunsthalle Krems, Austria (2011), ‘NUZ: Spirit of Ewe’, Two Rooms, Auckland, New Zealand (the product of a three-month residency in New Zealand in 2011), an exhibition at the Museo Diego Rivera Anahuacalli, Mexico City (2012; recently chronicled in an encyclopaedic publication produced with partner Julian Simmons,TITTIPUISSIDAD), and ‘Ordinary Things’, a major exhibition of her sculpture, at the Henry Moore Institute, Leeds (2012). From 2012-13, SITUATION – a space dedicated to her work at Sadie Coles, London – hosted eight consecutive shows. 2012 also saw the publication of After 2005 – Before 2012, a book chronicling the artist’s work over seven prolific years since the publication of her 2005 catalogue raisonné. Her latest exhibitions include a survey at Tramway, Glasgow (2014), ‘NOB + Gelatin’, Secession, Vienna (2013-14), and ‘SITUATION Absolute Beach Man Rubble’, Whitechapel Gallery, London (2013; accompanied by an extensive catalogue).

About the British Council

The British Council is the UK’s international organisation for cultural relations and educational opportunities. We create international opportunities for the people of the UK and other countries and build trust between them worldwide.
We work in more than 100 countries and our 7,000 staff – including 2,000 teachers – work with thousands of professionals and policy makers and millions of young people every year by teaching English, sharing the arts and delivering education and society programmes.
We are a UK charity governed by Royal Charter. A core publically-funded grant provides less than 25 per cent of our turnover which last year was £781 million. The rest of our revenues are earned from services which customers around the world pay for, through education and development contracts and from partnerships with public and private organisations. All our work is in pursuit of our charitable purpose and supports prosperity and security for the UK and globally.
For more information, please visit: www.britishcouncil.org. You can also keep in touch with the British Council through http://twitter.com/britishcouncil and http://blog.britishcouncil.org/. 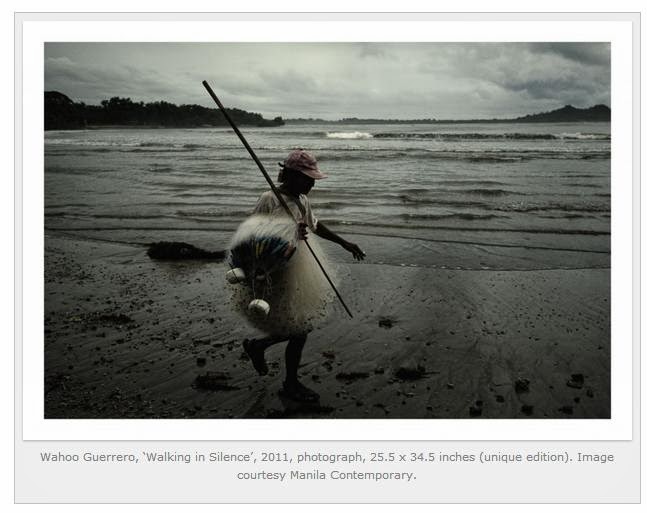 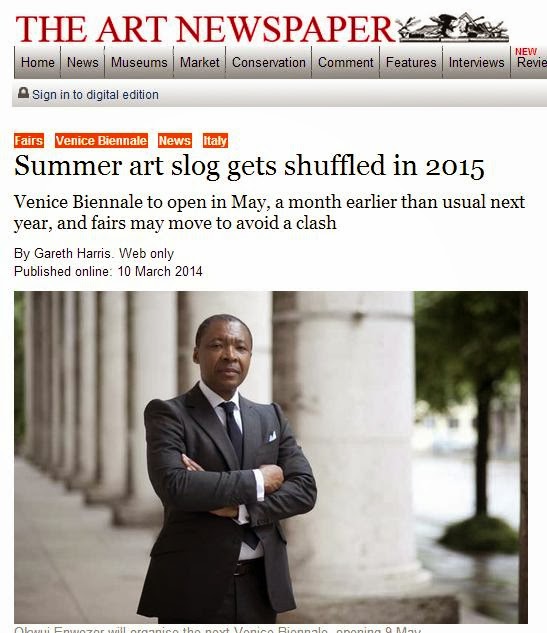 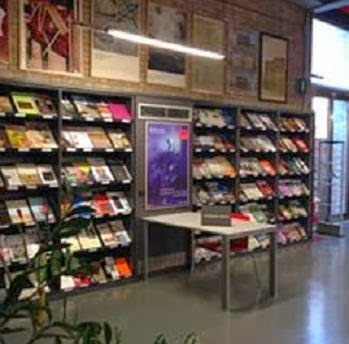 In 2015, a project from Irina Nakhova will be presented in the Russian pavilion at the 56th Venice Biennale. The Stella Kesayeva, founder of the Stella Art Foundation, will remain the commissioner of the pavilion. Irina Nakhova, born in 1955, was last year awarded the Kandinsky Prize for the project “Untitled.” She works as a painter, graphic artist, illustrator, and designer of large-scale installations, in which she uses all possible types of art, techniques and materials: photography, video, audio, objects, murals, collages, lightboxes, inflatable sculptures and so on. It is truly Nakhova, and not Ilya Kabakov, who is considered to be the creator of the first “total installations” — she transformed rooms in her own apartment, decorating them in a black or grey color, applying cut-out patterns and arranging the lights so that the rooms turned into changeable surrealist spaces (one of Nakhova's installation rooms from the 1980s was recreated at the exhibit “Rooms” in the Moscow Museum of Modern Art in summer 2011).
Pubblicato da Domenico Olivero a 09:34 Nessun commento: Link a questo post 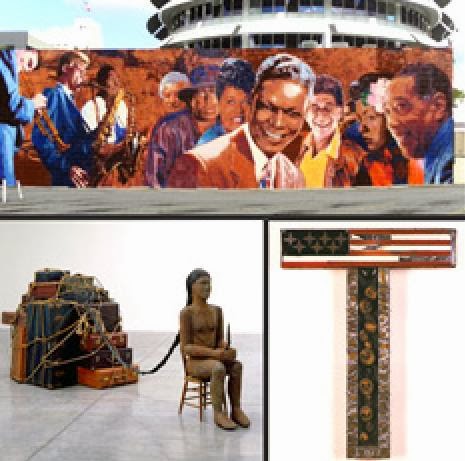