Slovenia - UTTER / the violent necessity for the embodied presence of hope

UTTER / the violent necessity for the embodied presence of hope

“I recognize that violence in whatever form it may manifest itself is a setback.” “Hope always has been one of the dominant forces in revolutions and insurrections, and ... I still feel hope as my conception of the future.”

“Violence is ineffectual. Terrorism is ineffectual. Effectuality needs to come along with peaceful hope. Violent hope can only live in poetry, as in Apolli- naire’s verse Et comme l’Espérance est violente.”

The project “Utter / The Violent Necessity for the Embodied Presence of Hope” focuses on three major themes − resistance, collaboration, and hope that are accomplished by a longterm coexistence of a group of artists within an architectural shell, the co-creation of repetitive performative actions, and the production of harmonic moments. The project involves a spatial installation in a given space, an architectural drawing as a reflection of thoughts, the integral experience of an artwork, a long-lasting performance as a reflection of the necessity of believing in change here and now. Since an artwork is mainly an object of inspiration, I place Stéphane Hessel’s thought into the centre of the conceptional reference points:

“To create is to resist. To resist is to create.”

Considering its features of a repetitive long-term performance, the project is a structured act of discipline. It is a call on collective sensibility. Through long-term repetitious actions, knowledge, and gestures in time sequences that last throughout the entire Venice Biennial, and the transformation of the gestures to rituals, the group of performers act like a nonviolent guerrilla body which by the power of poetry calls upon a pan- demic realisation of the idea about community and closeness − the common faith in the existence of true alternatives.

The plain architectural drawing in one single white form combines the concept of a house, a sacral, a public, and a production space and constitutes the project’s formal foundation.

It is my goal to confront an international audience with the overall project experience as a living functional mechanism driven by a solidarity of all elements involved: installation, individual visual elements, lighting, projections, sound, and performance. Thus, I intend to create and enable an overall experience of solidarity as an efficient way of operation. I believe in continuous and sustainable collaboration as a basis for the de- velopment and communicative value of the project.

Due to the necessary existence of faith in values differing from those presently shaping the world, the existence of hope in art as a driving force needs to be violent. Not as the violence of hope of a suicidal poet on a bridge, as described by Apollinaire, but as a violent necessity for the embodied presence of hope. If ideology inspires and does not dictate, artwork can become genuinely political. 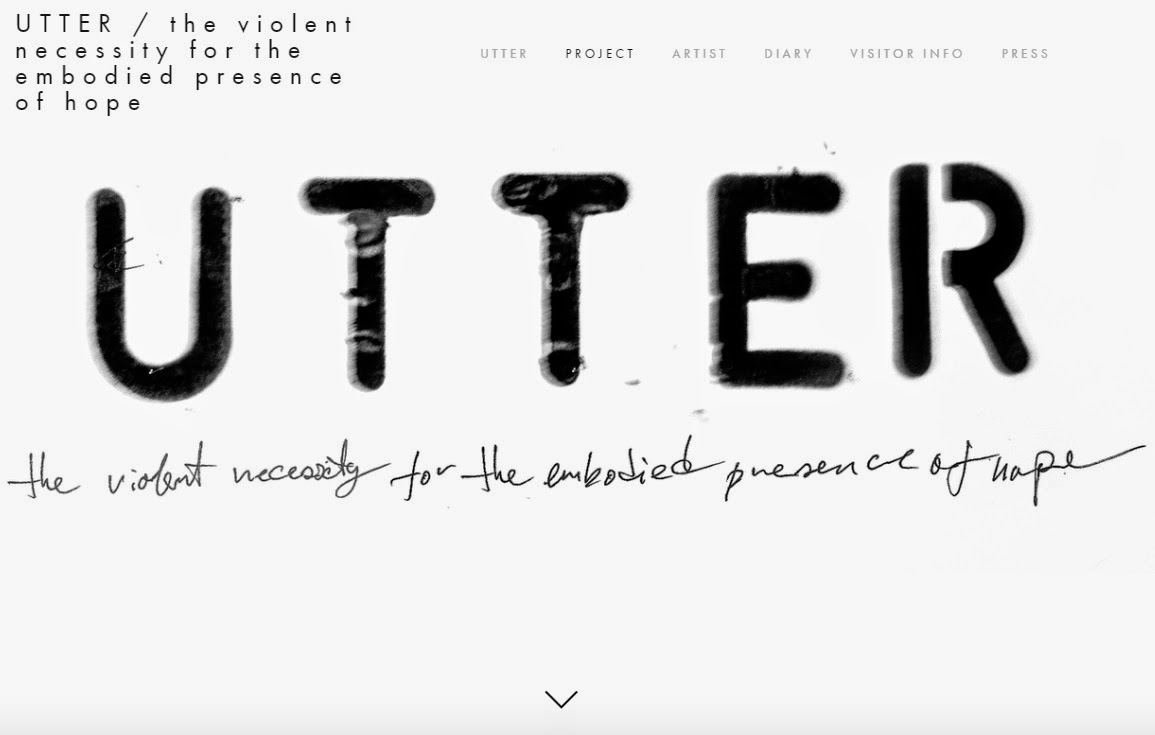 The project is an interlacement of distinctly visual situations, sound, music, performance, and of site-specific spatial installation being in dialogue with the historical venue of the Corderie.

1.1 ARCHITECTURE AS A REFLECTION OF THOUGHTS

On the occasion of the new placement of the Slovenian pavilion in the dense succession of curated projects and national presentations in the contemporary Arsenal − the former arms and munition warehouses (Corderie) of the Serenissima, the architectural reference point of the project is based on the recognisable brick shell of the building. Compared to the Giardini where individual countries competed with one another in the construction of national pavilions as architectural flag bearers of their power and influence, the Arsenal is acquitted of direct cognisability. The act of redefining the area that once served the exposure of Serenissima’s military power into a space entirely intended for art essentially supports the presented project. The homogenous space installation − an architectural drawing combining the concept of a house, a sacral, a public, and a production space in one single white form − will be placed as a referential contrast to the brick-built historical building shell of the Arsenals.

In 1992, the Israeli artist Absalon (Eshel Meir) planned a monumental installation and performance in the form of six structures, called Cellules. He stated: “I would like to make these Cells my homes, where I define my sen- sations, cultivate my behaviours.” The Cellules were supposed to be realised as six individual structures in six world cities: Paris, Zurich, New York, Tel Aviv, Frankfurt, and Tokyo, but during his life time only two were con- structed. He died in 1993, before he was able to finish his monumental project as a permanent performance.

“The Cell is a mechanism that conditions my movements. With time and habit, this mechanism will become my comfort ... The project’s necessity springs from the constraints imposed ... by an aesthetic universe wherein things are stan- dardised, average.”

“I would like to make these Cells my homes, where I define my sensations, culti- vate my behaviours. These homes will be a means of resistance to a society that keeps me from becoming what I must become.”

The conceptual parallel of the project is mainly based on the necessary development of the individual into a group of individuals with a common vision of coexistence within the context of a structured weekly series (see explanation in 4.5). As a part of the Biennial’s workdays, a group of protagonists will act in the form of a long- term performance, taking place throughout the 28-week-long Biennial.

The artwork can become sincerely political by comprising the power of art as an ideology (like in this case Togetherness, faith in the community), which repeats itself, and through persistence inspires difference and consequently change by not dictating it.
Pubblicato da Domenico Olivero a 00:30