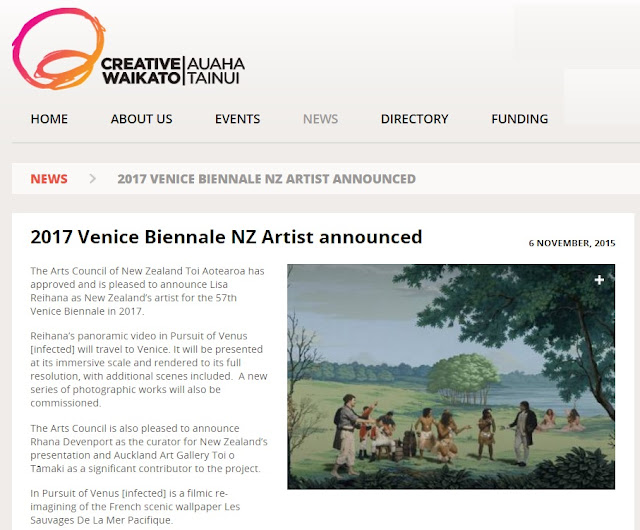 The Arts Council of New Zealand Toi Aotearoa has approved and is pleased to announce Lisa Reihana as New Zealand’s artist for the 57th Venice Biennale in 2017.
Reihana’s panoramic video in Pursuit of Venus [infected] will travel to Venice. It will be presented at its immersive scale and rendered to its full resolution, with additional scenes included.  A new series of photographic works will also be commissioned.
The Arts Council is also pleased to announce Rhana Devenport as the curator for New Zealand’s presentation and Auckland Art Gallery Toi o Tāmaki as a significant contributor to the project.
In Pursuit of Venus [infected] is a filmic re-imagining of the French scenic wallpaper Les Sauvages De La Mer Pacifique.
In Neoclassical France, entrepreneur Joseph Dufour used the latest printing innovations to produce Les Sauvages De La Mer Pacifique (1804), a sophisticated twenty panel scenic wallpaper. Mirroring a widespread fascination with the Pacific voyages undertaken by Captain Cook, de Bougainville and de la Perouse, its exotic themes referenced popular illustrations of that time.
Two hundred years later, Lisa Reihana has employed twenty-first century digital technologies to animate Les Sauvages De La Mer Pacifique. Enlivened with the sights and sounds of dance and cultural ceremonies, a vast video panorama is populated by a myriad of people drawn from across New Zealand and the Pacific.
Challenging historical and contemporary stereotypes, in Pursuit of Venus [infected] returns the gaze of imperialism with a speculative twist that disrupts notions of beauty, authenticity, history and myth. It is designed for multi-channel projection to create an immersive cinematic experience.
Alastair Carruthers, Commissioner for the 2017 Venice Biennale, says “in Pursuit of Venus [infected] has already captured a huge New Zealand audience and international attention with its sensuous reimagining of people, place and time.  In Venice 2017 Lisa Reihana will present a further evolution of her vast and beguiling vision, with new accompanying work.  The exhibition will be irresistible.”
Eleven high-calibre proposals were received for New Zealand’s presentation at the 2017 Venice Biennale. They were assessed by a Selection Advisory Panel, chaired by Arts Council Chairman, Dr Dick Grant.
Dr Grant says, “This will be New Zealand’s 8th official exhibition at the Venice Biennale.  A series of diverse and powerful presentations by New Zealand artists has preceded it and Creative New Zealand took a very broad view of the possibilities and form that the next presentation might take.  I congratulate the selection panel and Alastair Carruthers on this powerful decision for 2017.”
The Venice Biennale opens every two years in late May or June and runs for approximately six months. It involves more than 80 countries and attracts over 30,000 key international curators, critics, collectors and artists to the three-day Vernissage (preview) period alone. It is the world’s largest and most prestigious international contemporary art exhibition, attended by key curators, writers and collectors. 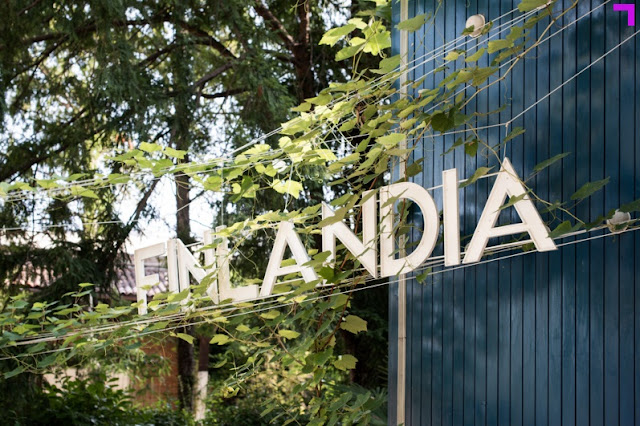 Frame Visual Art Finland invites proposals for the Pavilion of Finland at the 57th Venice Biennale in 2017.

Frame Visual Art Finland is seeking project proposals that examine independence as something formed through complex processes of dependence – ranging from natural resources and labour, language and religion to geopolitics, international commerce and law. The logic of exclusion, forgetting and silencing, is also to be recognised as foundational in the construction of national identity.
On the occasion of the 100th anniversary of Finland’s independence in 2017, we face an urgent need to reflect on how this is enfolded within the many histories as well as possible futures in a global realm ravaged today by many simultaneous, intertwined crises. The Pavilion of Finland, located in the Giardini in Venice, offers an acute critical context for this reflection.
Proposals may be submitted by a curator working together with an artist or vice versa. The curator and the artist can be individual or a collective. The artists must be based in Finland or be Finnish citizens.
The deadline for the applications is 10 January 2016. The international jury will invite 3–5 applicants to develop their proposals further. Each applicant invited to the second phase will receive a fee of 2000 euros, which can be used for covering work and travel costs as well as other expenses related to the project.
In April 2016, one project will be selected to be realised for the Pavilion of Finland at the Venice Biennale 2017. In addition to the Biennale exhibition, an extensive programme of research and debate as well as a publication will be produced based on the outcome of the open call. 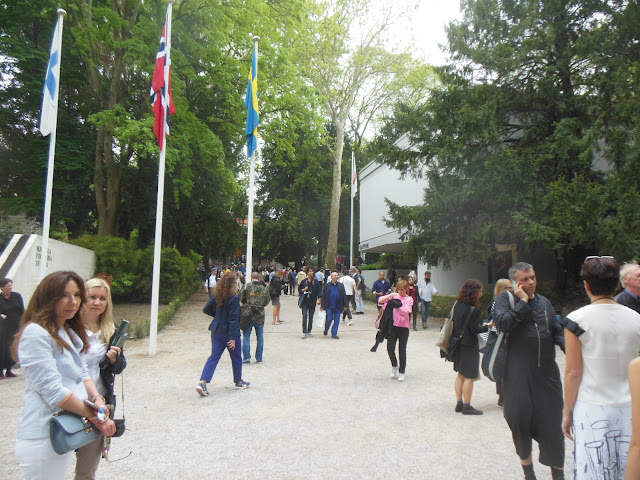 «There is no grander gathering of contemporary art works in the world than at the Venice Art Biennale, this year in its 56th incarnation. […] The Biennale is the coveted stage for the most internationally diverse metalogue of high-ranking artistic voices to be found anywhere.» Michael Kurcfeld, Los Angeles Review of Books

«An overview of the Venice Biennale in just a few words is nearly impossible.» Karen Wright, The Independent

«When art reflects strife at home. Venice Biennale pavilions for 3 countries portray the horror of conflict […]. The art often reflects the horrors at home: artists and curators, who view portraying reality as a duty, illustrate it in a range of media, and Venice becomes a platform for geopolitical frictions. Conflict is certainly visible this year in the pavilions of Iraq, Ukraine and Syria.» Farah Nayeri, International New York Times

«The ever expanded Venice Biennale, with its many collateral events scattered across the city, forces to give up on the idea of forming a comprehensive perspective on global art.» Jörg Heiser,Frieze

«Some of people feel that the idea of showing art in national pavilions is an anachronistic one: wandering around this year’s Biennale, I realized how much I disagree. […] The Biennale is one of the few places that encourages such an approach to thinking about our place in the world. I’m all for it. I wish I could do it justice.» Jennifer Higgie, Frieze 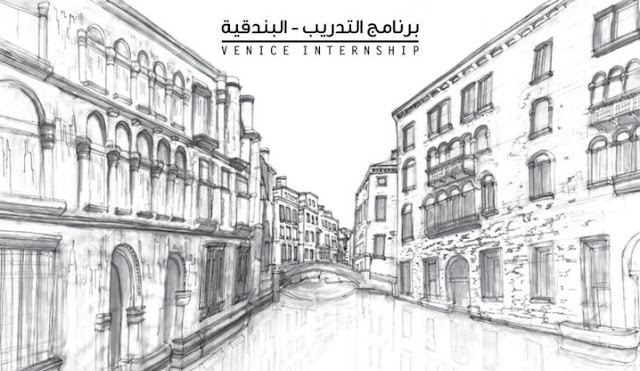 LAST CALL FOR APPLICATIONS FOR THE VENICE INTERNSHIP PROGRAM
DEADLINE TO APPLY: NOVEMBER 28, 2015
An opportunity for Emiratis and long-term residents to be part of the team at the 15th International Architecture Exhibition of la Biennale di Venezia, through a month-long internship in Venice. Selected interns will act as custodians and docents of the National Pavilion UAE la Biennale di Venezia, where they will get hands-on experience managing the exhibition.
Click here to apply. Applications will close on November 28, 2015.
To join the conversation follow National Pavilion UAE on Facebook | Instagram | Twitter and use the hashtag #UAEinVenice
Pubblicato da Domenico Olivero a 18:20 Nessun commento: Link a questo post 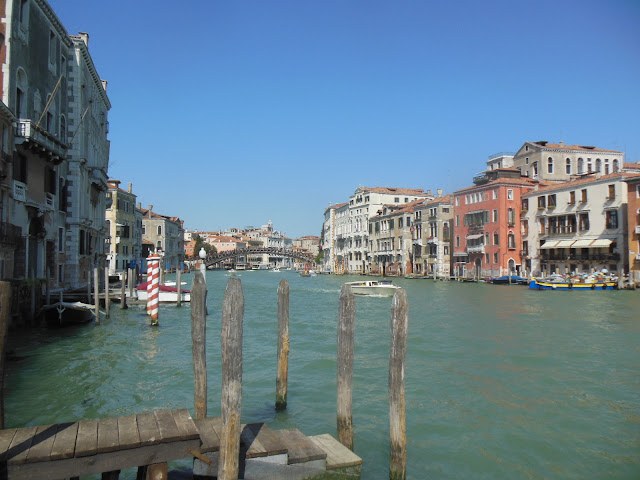