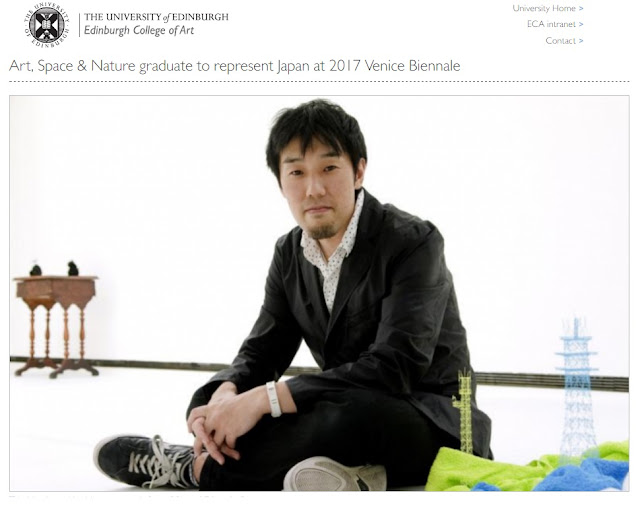 Takahiro Iwasaki, a graduate of the Art, Space & Nature – MFA programme at Edinburgh College of Art (ECA), has been selected to represent Japan at one of the world’s most important visual arts events.
Takahiro was selected by the Japan Foundation to show the work entitled “Upside-down Forest” at the Japan Pavilion.
Since graduating from ECA, Takahiro has been based in his native Hiroshima developing a thread of works which began on the Art, Space & Nature programme. Takahiro often uses everyday objects that are found around us as materials for his works. These include items that are regarded as garbage, such as dust, cloth and hair. By overlaying another image onto these to create a figurative representation, he gives meaning to things that are seemingly chaotic. For example, he makes a stack of dust cloths look like the mountains of nature, and books appear like buildings, experiencing a change in the way we perceive things.
Takahiro’s work is characterized by his meticulous handiwork and labour-intensiveness, developing the language of the architectural model. He creates cranes and steel towers from the threads pulled out from dust cloths or the bookmark strings attached to books. The delicacy of the work being stunning features of his ongoing ‘ Out of Disorder’ series.
“When I looked at the cross-section drawing of the Japan Pavilion, I saw that the four pillars rising from the piloti on the first floor served as the walls of the exhibition room on the second floor, and the ceiling of the first floor was also the floor of the second floor. It felt just like a boundary separating the sea and land,” said Takahiro of the work he’ll be producing for the exhibition, “I wanted the visitors to observe Itsukushima Shrine in Hiroshima, which offers a different view depending on the tides.”
“By creating the different perspectives of looking upward and looking downward, I hope to create a multifaceted spatial experience.”
After completing his MFA at Edinburgh College of Art, he went on to a PhD in Art at Hiroshima City University.
Takahiro’s selection as Japan’s sole representative at this showpiece event for contemporary art is a significant achievement, in an already notable career. Takahiro has exhibited at the Asia society in New York, 2015, and has held solo exhibitions at the Kurobe City Art Museum and the Oyama City Art Museum in the same year. Group shows include the 10th Lyon Biennale (2009), Yokohama Triennale (2011) and the 2013 Asian Art Biennale in Taiwan.
The 57th International Art Exhibition of the Venice Biennale runs 13th May - 26th November 2017.
Pubblicato da Domenico Olivero a 12:52