Balzer Projects is pleased to announce that visual artist and filmmaker Mika Taanila has been selected as one of six artists in the Nordic Pavilion at the 57th Biennale (Curator: Mats Stjernstedt, Moderna Museet, Stockholm).

As part of the group exhibition Mirrored in the Nordic Pavilion of the 57th Venice Biennale Taanila will show several series with new works, each consisting of multiple books related to cinema. Each book is “re-edited” by the artist. Instead of text editing, the books are “treated” with various instruments and tools such as knives, scissors, scalpels, drills and handguns, creating a process parallel to traditional film editing, i.e. splicing. These books are works of “moving image“, quite literally: images are moved and taken out, erased, cut-out, transformed and discarded. Immaterial ideas of cinematic writing/reading transform into eerie cinematic collages.

The works of Mika Taanila evolve in the realms of art, photography, experimental music, and (documentary) film. At the core of his oeuvre is the use of archival and found footage; this approach of cinematographic archaeology enables Taanila to create new material in which media obsoleteness and belief in the future collide and recontextualize. Thematically, Taanila’s work deals with archiving and the gradual loss of memory which is reflected also by using analogue as well as digital technologies. 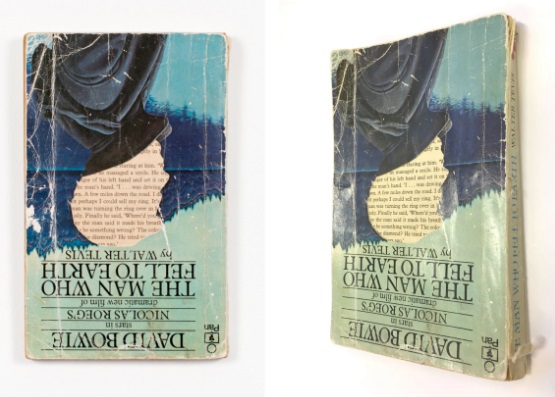 PREMIERE OF VIDEO-INSTALLATION AT BALZER PROJECTS IN BASEL

Balzer Projects is pleased to announce the premiere of Taanila’s most recent projects, a video installation and book project, both entitled The Earth Who Fell To Man. The exhibition is also on view parallel to Art Basel.
The video installation The Earth Who Fell to Man is a sequel to Taanila’s reductionist film and sound pieces, such as My Silence from 2013. The elimination of the core of the film, the eradication of human form, transforms the film into a ‘deleted narrative’. The piece features shots from Nicolas Roeg’s legendary film The Man who Fell To Earth (1976) starring David Bowie, yet without any recognizable human resemblance. Merely landscapes, building, backdrops, roads, sky and the earth are running in total disarray. The key element: mankind, or in this case the alien Thomas Jerome Newton in the iconic embodiment of David Bowie, is systematically deleted.
The shots are running upside down on screen and are enhanced with the acoustical accompaniment of earthquakes, falling rocks and landslides. The Earth (as the title suggests) seems to be falling to Man.
On view will also be a copy of the original novel, The Man Who Fell To Earth. Its cover has been worked on by the artist and its core element, the man (David Bowie), has been removed. Merely the silhouette of the profile remains, revealing parts of the text on the first page below.

Mika Taanila (*1965) lives and works as filmmaker and visual artist in Helsinki. His works have been exhibited in important international group shows, including Aichi Triennale (2013), dOCUMENTA (2012), Shanghai Biennale (2006), Berlin Biennale (2004), Manifesta (2002) and the Istanbul Biennale (2001). His solo shows include balzer projects, Basel (2016), Kiasma Museum of Contemporary Art in Helsinki (2013-14), Museum of Contemporary Art St. Louis (2013), TENT, Rotterdam (2013), Galleria Heino, Helsinki (2010), Badischer Kunstverein, Karlsruhe (2008), Dazibao, Montrèal (2007) and Migrosmuseum, Zurich (2005). Taanila's films have been featured at more than 300 international festivals and special events, including the Berlinale (Forum Expanded), Toronto International Film Festival, IFFR Rotterdam, the International Short Film Festival in Clermont-Ferrand, Karlovy-Vary Film Festival, Midnight Sun Film Festival, CPH: DOX, IDFA in Amsterdam and the Oberhausen Kurzfilmtage. In 2015 he received the prestigious Ars Fennica award. A retrospective of his cinematic work will be shown at GEGENkino in Leipzig in April 2017. One of his most recent experimental films, entitled Branches, was not only selected for the international competition of the 63. Oberhausen Kurzfilmtage (11 – 16 May), but will also be on view at TAPE Basel (12 – 17 June).
Pubblicato da Domenico Olivero a 22:02