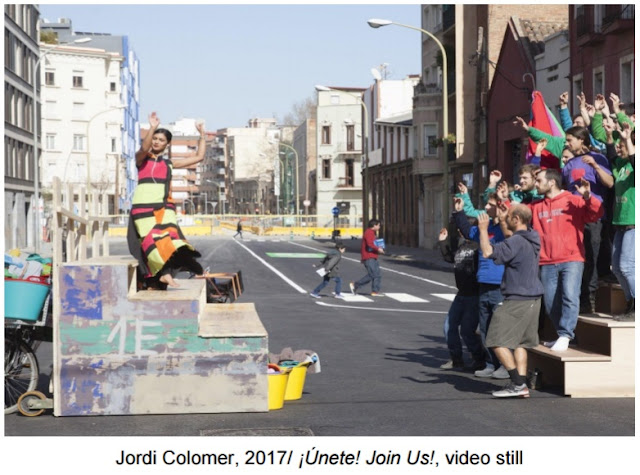 ¡Únete! Join Us! ​invites visitors to become participants in an exploration of nomadism and collective agency.

Transhumance, wanderings, journeyings, strayings, displacement: these themes are key to ¡Únete! Join Us!​, whose reference point is rooted in urban utopias that use movement as part of a radical rethinking of social imagination. Marking a return to his early sculptural and theatrical interest, Jordi Colomer’s exhibition at Pavilion of Spain is conceived as an installation of installations.

Precarious sculptures and transitory architectures form a theatre within the pavilion, encompassing its audience as they walk through the space and turning them into actors, mobilising the space with their presence. The installations offer a path via several video narratives; a journey of occasions, unexpected encounters, playful improvisations and collective gestures that reveal how a community turns an urban landscape into a potential site for exchange, capable of affecting reality.

“The city is something that needs to be moving,” notes curator Manuel Segade. “A contemporary urban landscape represents displacement and various themes involving movement – political, social and physical – while also moving between the public and the personal.” The fictional premise of the video pieces involves a group of people moving across different sites, exploring the semantics of displacement.

An abandoned racetrack, an emergency trailer park, tourism-spoiled landscapes through the Mediterranean’s coastal areas and other spaces exclusively repurposed in detail to imitate pre-existing locations. These decidedly low-resource settings are a reflection on the uncertainty and ambivalence of a mobile, unstable, border-crossing citizenry. Suspended between a portable pavilion and a wanderer's wagon, a moveable contraption connects the spaces via an itinerary that conjures a Kafkaesque Babel where nomadic motion becomes linguistic commotion, a vernacular displacement inflecting and translating the activities of a de-territorialized community. Colomer’s community could be seen as a poetical occupation of a utopia under construction. Spain has always played a prominent role in the history of la Biennale di Venezia. Its pavilion in the Venice Giardini was designed in 1922 by Javier De Luque and renovated in 1952 by Joaquin Vaquero Palacios.

Since 1950, the Ministry of Foreign Affairs and Cooperation has been directly responsible for coordinating the country’s exhibitions in the Spanish Pavilion, and, throughout this time, it has strived to promote Spain’s rich artistic heritage and talent. Acción Cultural Española (AC/E - Spain’s Public Agency for Cultural Action) has been involved in the support of contemporary creation at the Venice Biennale, both in the production of the Spanish Pavilion and in the international selection.