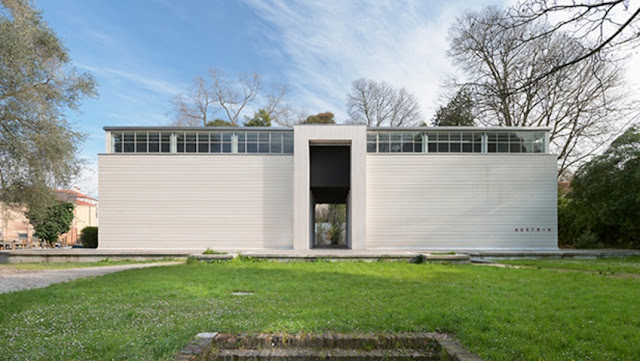 IN THE AUSTRIAN PAVILION AT THE

9 February 2017. Christa Steinle, Commissioner of the Austrian Pavilion in 2017, is presenting Brigitte Kowanz and Erwin Wurm, two artistic positions who focus on examining and refining the concept of sculpture in the international art discourse.

With their oeuvres, Brigitte Kowanz and Erwin Wurm – who have both received the Grand Austrian State Prize for their extraordinary work – operate at the intersection between sculpture and architecture. Both react to changes in our perception and experience of space brought about over the past two hundred years by machines, media and new materials.

“Although the most famous phase of Wurm’s work is known as performative sculpture and Brigitte Kowanz’s works as light installations, thus causing them to appear to be worlds apart in terms of designation, they nevertheless work in the same sphere, i.e. on the expansion of the arts ushered in by the rejection of the image. Through the aid of her light installations, Brigitte Kowanz has immaterially redefined space and architecture. With his famous house paraphrases, from ‘House Attack’ (2006) to ‘Narrow House’ (2010), Erwin Wurm has transformed architecture into sculpture, consistently evolving the performative turn of sculpture with his ‘One Minute Sculptures’. Kowanz’s light objects and light spaces with their inherent writing and signs constitute an autonomous achievement for art. With their innovative and independent contributions, Kowanz and Wurm form part of an international movement within the spectrum of an extended concept of sculpture and
space”, as Christa Steinle comments on her aesthetic concept for the Austrian pavilion.

RELATIONS BETWEEN LIGHT, LANGUAGE AND REFLECTION

Brigitte Kowanz’s position in recent art history is a distinctive one. Since the 1980s, her work
has centred on light as an artistic medium that she investigates in relation to space and in
combination with signs, codes and language. She uses light as a means of transcending and adding precision in order to question the conventional concept of image and painting and to hone a new, integrated relation between work, space and viewer. In doing so, carrying on the tradition of reflection on the media, she concentrates on dealing with the fundamental parameters of art: visibility, perception and the production of meaning. Light makes everything visible, but remains invisible itself. Light determines places, but knows no place itself. In “Light Never Stays / Knows No Place / Is Continually Changing / With Its Environment“ (2003/2005), for example, Kowanz explores the unfathomable and ephemeral with analytical passion. Light defies capture, light is in motion, light is everywhere.

The result is conceptual, but poetic objects and installations emerge, in which she also investigates the mechanisms of language. This mutual mirroring of light and language is often accompanied by actual mirrors, that cause reality and virtual mirror image to pervade each other in her exhibition enactments, blurring the boundaries between artwork and viewer.

In her space-forming mirror installations (e.g. MUMOK Vienna 2010), she thus breaks open the boundaries of three-dimensional, architectural space, adding virtual spaces to it.

Kowanz deploys mirrors as a kind of metamedium of visual transfer: by penetrating real space and virtual space, mirrors contain an infinite number of images, transcending and dematerialising the boundaries of space.

Light, language and mirrors constitute the trinity of themes that, combined with each other,
effectively multiply the possibilities of transcending one’s own bounds and mutual penetration to the point of infinity. In these virtual spaces, Kowanz also confronts the viewer with current socio-political issues. In one of her latest pieces, “Maastricht 07.02.92 01.11.93“ (2016), she formulates her concern about the breakdown of the European Union. In this case, the mirror serves, quite literally, as a medium of reflection in which viewers find themselves.

Brigitte Kowanz’s art is conceptual poetry. To her, light as the origin of all life is information, the shaping of space-time.

SCULPTURE AS AN OPEN FIELD OF ACTION

With his sculptures, Erwin Wurm makes a globally acknowledged autonomous contribution to an international trend: sculpture as a form of action. To begin with, Erwin Wurm reinterprets the classical criteria of sculpture – volume, weight, stasis, gravity, form and mass. Instead of the threedimensional object on a plinth, Erwin Wurm focuses on the human being himself and his actions with everyday objects in unusual positions, capturing this minimal period of time in photographs.

Photography and video become a medium of sculpture. With these famous One Minute Sculptures, the audience become participants in designing the sculpture and the sculpture becomes an open field of action. Taking a further step, Erwin Wurm offers the audience various instructions for making sculptures in the museum space, subversively encouraging the individual to take part in social action. By consistently expanding the concept of sculpture, Erwin Wurm demonstrates that he can find an answer to the moods and social conditions of our time in an intrinsically artistic manner – sometimes sublime, often philosophical – in images and objects. Wurm’s concept of sculpture, that
revolves around a wide range of materials and media, makes explicit reference to the traditions of the “Neo-Avantgarde”, in which provocation and venture always played a role.

In other distinct bodies of work, we see the insights gained from the action sculptures transferred back to static objects. One example is “Narrow House“ (2010), an intervention in public space that was on show at the Biennale di Venezia in 2011, a work with which Erwin Wurm spectacularly sums up the confinement of the petit bourgeois family. Here again, Erwin Wurm uses his largeformat sculptures in public space to pan out new options in the aesthetic examination of sculpture and architecture.

All of his works refer to a critical, media-analytical consideration of the concept of sculpture by transcending the boundaries between object and performance, sculpture and photography, between artist and audience. Hence, his works also offer a wide basis for reflection on sociocultural and socially relevant questions. Where once sculpture was above all stasis, since the advent of kinetics it is dynamics. As “social sculpture” (J. Beuys), sculpture is equally action. Wurm turns sculpture into the audience’s form of action.

Christa Steinle has contributed significantly to and enriched national and international
developments in contemporary art through her activities as Director of the Neue Galerie in Graz / Universalmuseum Joanneum or as Austrian Commissioner of the Cairo Biennale in 2004, among others. She has been consistently committed to promoting young artists, critically examining artistic patterns of thought and the art industry.