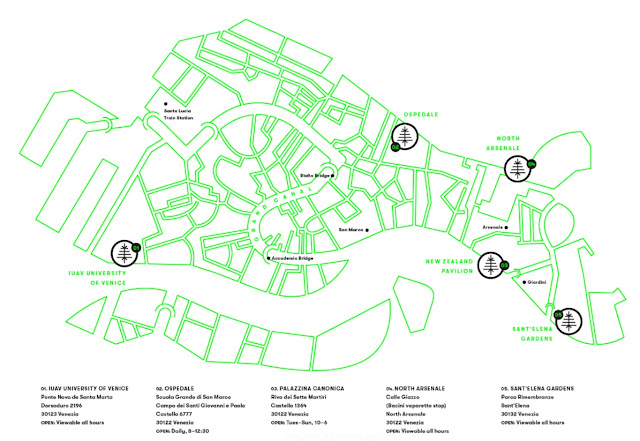 In each site, viewers will find industrially constructed pine trees (stealth towers) which broadcast vast inventories of millions of vanished, obsolete, lost, or destroyed objects, ideas, life forms, and systems. These radically diverse lists will be enunciated by an automated voice in an anechoic chamber in the New Zealand pavilion and broadcast to the receiving antennae, the artificial trees. The sites in which they are installed resonate with the artist’s exploration of our relation to bygone phenomena and enduring systems of knowledge and belief.


In contrast to the linear history of progress – a narrative which underpins so much of Western understandings of the world – Post hoc foregrounds histories of extinction, destruction, obsolescence, and loss. Mitchell’s encyclopaedic inventories range from lost islands to extinct plant species, burned books, dead languages, destroyed artworks, disbanded political parties, former kingdoms, and much more. In sync with the audible broadcast, they will be printed onto rolls of paper inside the historic library of the Palazzina Canonica, pointing to the buried histories that sit beneath our present moment and raising questions about how we might shape our futures.


Lead Curator Zara Stanhope says in the catalogue accompanying Post hoc, “Mitchell’s speculative, conceptual practice has a poetic and playful edge in its exploration of relations between living and non-living things and philosophical concepts. [...] While privileging a poetic subjectivity that creates space for doubt, Post hoc is affectively and politically charged: it requires viewers to actively engage and determine their relationship to insistent and profuse loss, and to the promise of its continuity.


Project Curator Chris Sharp says, “In many ways, Post hoc could be seen as an Anthropocene version of the Library of Alexandria, and an inverted one at that, in that Post hoc, like the origins of written poetry, which are said to allegedly come from the inventory of ancient shipping lists, is an inventory of that which is no more.”
Pubblicato da Domenico Olivero a 20:04